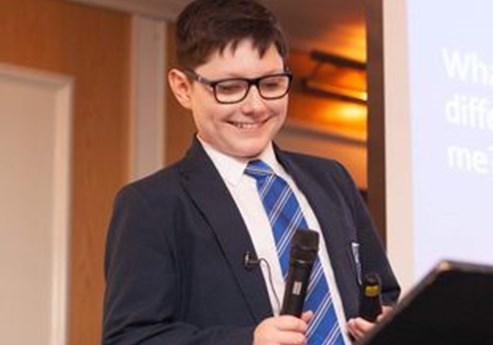 Marcus Wilton, 14, was once told in front of his school that he was "just a naughty boy" who would "never amount to anything", but is now using his experience to help others.

A teenage "class clown" now has to travel over 40 miles to school each day after being excluded from three different institutions.

The youngster was excluded from two nursery settings before beginning formal education and was later permanently excluded from mainstream primary school at the age of eight, the Liverpool Echo reports.

Marcus, from Warrington, remembers being told in front of his whole school assembly that he was "just a naughty boy" who would "never amount to anything".

Those comments, alongside the adverse childhood experiences he suffered from a young age, has had a “huge impact” on his mental health, he claims.

However, the aspiring game developer wasn’t being the “class clown” through choice - but rather as a result of his ADHD, a condition which he says makes getting into a taxi to school each day “a mountain to climb".

“I’m juggling hundreds of ideas, feelings and thoughts constantly, which often means I can’t concentrate on other things, especially conversations, listening, following instructions and just focusing on what I need to," he told the Liverpool Echo.

"It’s exhausting when you feel like you’re switched on all the time just to be able to keep up with the world. In school, I was left behind.

"All the things expected of kids in a classroom, sit still, focus, don’t shout out, and complete work, I just couldn’t do, not because I wasn’t clever enough but just couldn’t focus as there was too much stimulation.”

Marcus suffered early years trauma which meant he had to move in with his granny, Jean Fitzpatrick, and has continued living with her since he was five.

Jean, who remembers being told Marcus was “uneducable, unmanageable,” added: “For people like Marcus the world is a bewildering place. With an oversensitive sensory system, they battle to process the maelstrom of information flowing into their brains.

"This leads to anxiety and, for Marcus, was presented as behaviours such as self-harm, emotional meltdowns and work avoidance strategies, which Marcus was really good at, playing the class clown and getting into trouble constantly.

"Even with one-to-one support, he struggled to fit in and felt sad that he had to leave his friends behind and go to a different school. On top of that, he spent over 10 hours a week in a taxi travelling to school.”

Wanting to make the most of his experience, Marcus has been working towards making the education system more inclusive to those with ADHD.

Noting that “everyone deserves the right to education,” he has been campaigning for schools and their staff members to be trained in neurodiverse conditions as opposed to leaving those with ADHD to go to specialist schools for a fair chance in life.

These days, Marcus attends Rossendale School in Lancashire, over 40 miles away from his home.

Although it took a while for him to get settled, he said: “When I went to my new school, even though it was meant to be a step forward, I still felt I was being left behind, having to leave my friends and my community.

"I know now it was the best decision for me and my education because I’m not different anymore there are lots of other Marcus’ at this school.

"Teachers are trained specifically to support kids like me. I have a personal curriculum that focuses on my strengths, not my weaknesses. There are only five others in my class with two staff so it's much calmer and therefore easier to learn.”

Despite all of this, Marcus has made it his mission to deliver the positive message that "it's okay to be different" to other young people with neurodevelopment conditions.

Marcus started speaking at conferences and events at just nine years old in an effort to raise more awareness of “brains that are wired differently.”

After speaking, Marcus’ closing mantra is “if it helps just one person here to believe what lies within them, then it’s worth me being here.”

In just over half a decade, Marcus has gone from a “feral child to a public speaker,” having starred in a BBC documentary, represented the UK at The World EXPO in Dubai during education week and delivered a lecture at Imperial College London, making him the youngest person to do so.

But now, he has made the shortlist of eight out of 72,000 nominations for the National Diversity Awards.

The NDA’s, which were last held in Liverpool, are a prestigious ceremony which sees special guests and celebrities come out in support of incredible role models and community organisations who have changed the lives of so many. Marcus said winning an accolade “of this calibre would mean so much to me".

He added: “Even though I don’t do what I do for recognition, winning would give me credibility knowing that people take me seriously despite my age. It will help with a wider reach so I can hopefully make a bigger difference, and be heard on more platforms. The award would be justification for all my self-doubt, the lack of confidence, and the obstacles I have overcome."