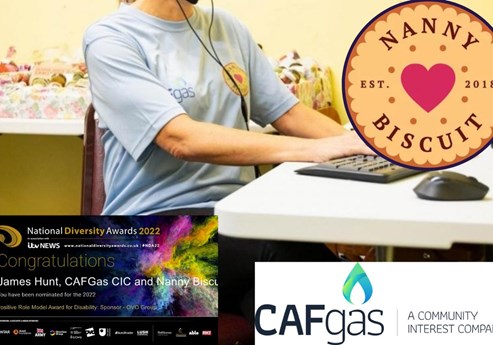 The founder of Nanny Biscuit and Cafgas CIC has been nominated for a national award celebrating all aspects of diversity.

James Hunt, from Deeside, has been nominated for the Positive Role Model Award for Disability in the National Diversity Award 2022.

The awards will be hosted at the Liverpool Anglican Cathedral on September 16, where Britain’s most inspirational and selfless people will come together to recognise individuals and groups from grass roots communities.

ITV News will be working in association with The National Diversity Awards to highlight role models and community organisations on regional and national news channels.

Rachel Corp, Acting Editor, ITV News said: “We are pleased that ITV News will once again be supporting the National Diversity Awards. ITV News remains committed to telling the stories of those, who through their work and dedication to helping others have made a difference; enhancing equality, diversity and inclusion in our society.”

James has been nominated for his work with Nanny Biscuit and Cafgas CIC, which has seen over 46,000 meals delivered to the most vulnerable in communities around Northeast Wales and Chester, and other projects such as buddy calls for lonely people, subsidised food and free emergency food packages.

Nanny Biscuit began after James was injured in Afghanistan during Herrick 19 2013 and has now lived with a physical disability for six years. When James was medically discharged, he suffered with his disability and his mental health but decided he needed to do something about it. That something was Nanny Biscuit, named after his nan who would sneak her grandchildren biscuits.

In order for it to be sustainable, James then changed his gas company into a social enterprise and created Cafgas CIC.

On the nomination, James said: “I personally don't see myself as a role model but if I can use my lived experience around disability, mental health and addiction to help inspire and help people then brilliant.

“It would mean a lot to me to reach the finals if anything for the benefits it would bring Cafgas CIC and Nanny Biscuit. I would also like to take this opportunity to thank all the volunteers past and present without you none of this would of happened.”

In order to win the award, nominees must receive votes.

The National Diversity Awards receives over 60,000 nominations and votes annually. Founder and CEO Paul Sesay said: “As we enter our 11th awards season, The National Diversity Awards prepare to welcome a host of outstanding role models and charities to our family. We look to those who represent progress, spirit and resilience, and I cannot wait to learn about the wonderful work being carried out this year.”